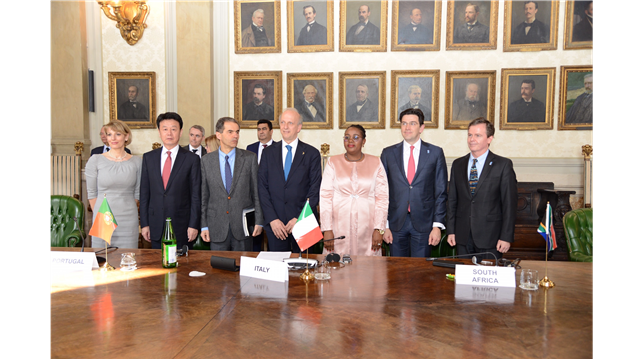 The countries involved in the Square Kilometre Array (SKA) Project have come together today in Rome for the signature of the international treaty establishing the intergovernmental organisation that will oversee the delivery of the world’s largest radio telescope.

Ministers, Ambassadors and other high-level representatives from over 15 countries have gathered in the Italian capital for the signature of the treaty which establishes the Square Kilometre Array Observatory (SKAO), the intergovernmental organisation (IGO) tasked with delivering and operating the SKA.

Seven countries signed the treaty today, including Australia, China, Italy, The Netherlands, Portugal, South Africa and the United Kingdom. India and Sweden, who also took part in the multilateral negotiations to set up the SKA Observatory IGO, are following further internal processes before signing the treaty. Together, these countries will form the founding members of the new organisation.

Manuel Heitor, the Portuguese Minister of Science, Technology and Higher Education, was in Rome to sign Portugal´s adhesion as one of the founding members of SKAO. The Portuguese consortium brings together the Instituto de Telecomunicações, the Polytechnic Institute of Beja and the Universities of Aveiro, Porto and Évora, through the Infrastructure ENGAGE SKA.

The Square Kilometre Array (SKA) project is an international effort to build the world’s largest radio telescope. The SKA is not a single telescope, but a collection of telescopes, called an array, to be spread over long distances. It will be constructed in Australia and South Africa with a later expansion in both countries and into other African countries.

The design has been led by the SKA Organisation based near Manchester, UK and supported by more than 1,000 engineers and scientists in 20 countries. The SKA Organisation is transitioning to the SKA Observatory, an intergovernmental organisation established by treaty, to undertake the construction and operation of the telescope.

The SKA will conduct transformational science and help to address fundamental gaps in our understanding of the Universe including the formation and evolution of galaxies, fundamental physics in extreme environments and the origins of life in the universe.


Photo: Manuel Heitor (third from the left), was in Rome to sign Portugal´s adhesion as one of the founding members of SKAO