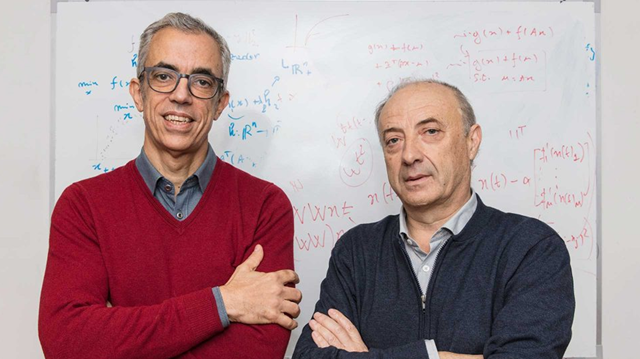 Recently published by Clarivate Analytics, in this year´s edition of the Highly Cited Researchers list, and for the second time, IT has two of its researchers among the “World´s most influential Scientific Minds”. This year, Mário Figueiredo, who has been a “regular presence” for the last five years, is once again accompanied by José Bioucas-Dias, whose first appearance on the list was in 2015.

Although they are classified in different areas, Geosciences in the case of José Bioucas-Dias and Engineering in the case of Mário Figueiredo, both are part of the Pattern and Immage Analysis group from IT in Lisbon, having already participated in several projects together.

Mário Figueiredo has become a world reference in the research field of image reconstruction computational techniques, relevant to areas such as magnetic resonance imaging for medical diagnosis, or to satellite images. The articles that most contribute to his regular appearance in this listing focus on the development of algorithms that allow solving problems of restoration or reconstruction of signals and images, such as noise removal, restoration of blurred images, etc.

The processing of multiband images (eg. pairs of interferometric radar images and hyperspectral images), obtained from satellite or in the laboratory, have been the focus of José Bioucas-Dias. His research aims to restore or reconstruct high quality images from low quality versions, through processing algorithms. In interferometric radar applications, he has developed algorithms that reconstruct 3-D terrain altitude maps from pairs of radar images acquired by a satellite. In the case of hyperspectral images (images with hundreds or thousands of colors), the algorithms developed by the IT researcher allow, for example, to check which compounds are inside a tablet, to detect certain pathologies or to identify materials accurately. "The scientific innovation resides fundamentally in the models used to formulate the problems of restoration and reconstruction and in the algorithms to estimate the original images", explains Bioucas-Dias.

The list of researchers who are influencing world science focuses only on the highly cited articles, which represent 1% of what is published worldwide in 21 scientific fields. There are 14 Portuguese researchers to appear among the 4000 scientists included in this list, which includes 17 Nobel Prize winners.