GreenSol: Materials for green processing and their integration in low-cost OPV cells 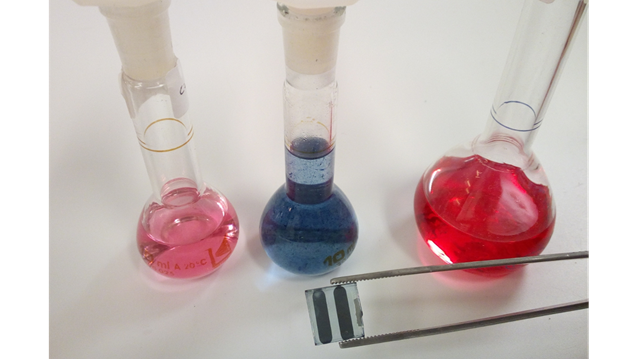 The project GreenSol aims at preparing new organic semiconductors with solubility in solvents of low toxicity (e.g. water or ethanol) to perform as the photo-active layer in photovoltaic (PV) cells. The solubility of organic photo-active materials enlarge the range of applications of PV devices to products where the conventional silicon-based technology cannot easily enter, as power-generating curved roofs or windows, wearable items, etc. In addition to advantageous processability, organic photovoltaic (OPV) modules can be lightweight and semi-transparent (i.e., nearly transparent across the visible spectrum) due to the high absorption coefficients of the organic semiconductors that enable that photoactive layers can be very thin (ca. 100 nm). Remarkable progresses in performance of OPV technology have recently demonstrated efficiencies surpassing 13% in small scale device prototypes. When translated to large areas, OPV modules drop in efficiency, due to reasons mostly related with the fact that ink formulations used in laboratory are not directly transferrable to large scale deposition techniques (e.g. rol-to-rol printing). This occurs because the device performance depends on the active layer morphology, i.e. the assembly between the organic semiconductors in the active layer, and this is affected by the type of deposition technique. Another important aspect relates to the toxicity of the solvents used to deposit the organic layer. In fact, current organic semiconductors have restricted solubility and require highly toxic solvents not compatible with uses in large scale (e.g. chlorinated solvents).

As a result, the developed materials should be more adequate to large-scale fabrication processes. So far, the research team from the Organic Electronics Group at IT, coordinated by Ana Charas, prepared several organic materials exhibiting solubility in ethanol by incorporating hydrophilic side groups in the semiconducting skeletons. Interestingly, some of the new materials absorb in the near-infra-red - a rare property in organic PV materials - that can lead to more efficient devices, due to enlarging the fraction of absorbed photons from sunlight. The results have shown that for one of the new materials, the incorporation of hydrophilic groups lead even to improvements in devices efficiencies, in 20 to 53%, although the solvent was kept as conventional. When going to solvents as ethanol, the hydrophilic character of the solubilizing groups inserted in the semiconducting skeleton affect the assembly within the organic layer of the cells and appears to complicate the charge generation and/or charge transport. In this regard, additives and co-solvents can be at the basis of strategies to exploit the new materials for real «green» PV technology.