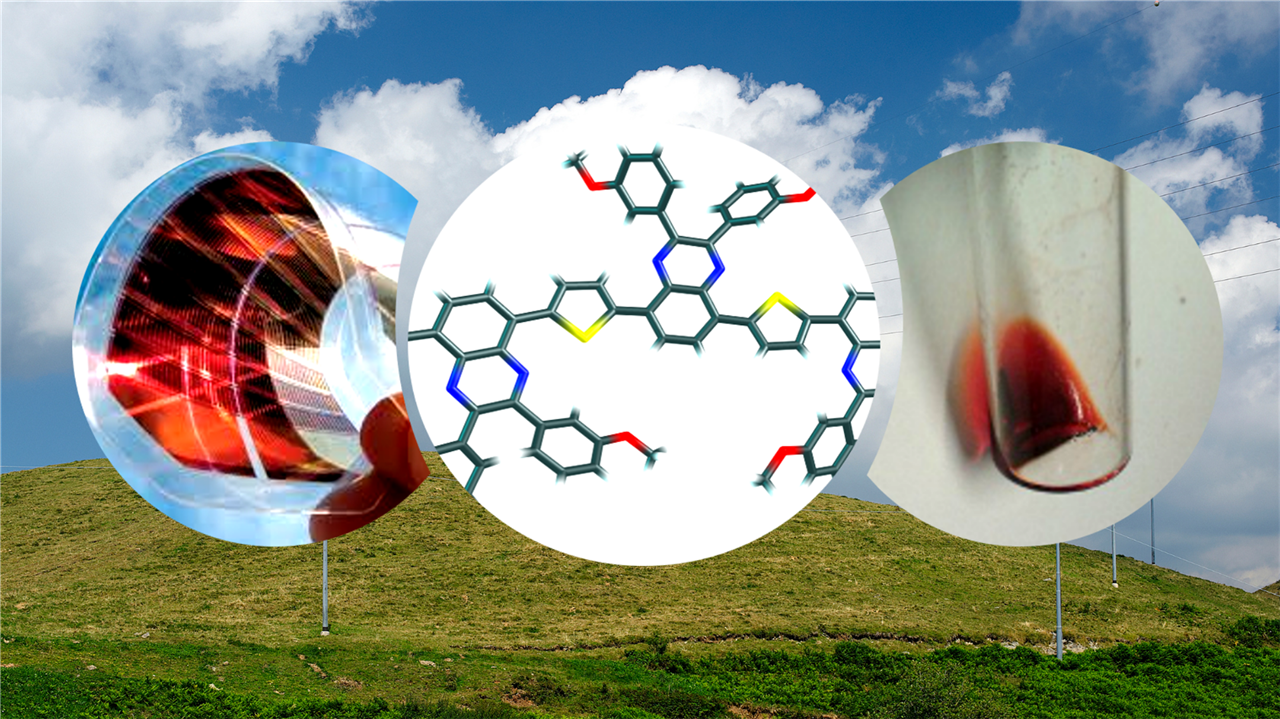 Solar photovoltaics using optically active organic semiconductors, i.e., carbon-based materials which can absorb light and generate and transport electric charges, are today considered among the most promising clean and renewable energy technologies. This is because of the unique characteristics of the organic semiconductors employed which enable that semi-transparent, lightweight, and mechanically flexible devices can be fabricated using low-cost techniques.
Due to their chemical structure, the organic semiconductors typically used in organic photovoltaic devices (OPVs) can be dissolved in solvents and deposited as inks by printing techniques, such as roll-to-roll (R2R) printing. The opportunity to produce solar photovoltaic modules by printing inks on flexible and large foils, in combination with semi-transparency in the visible, launches OPV technology to applications where crystalline silicon-based solar technology can hardly enter, as power-generating curved roofs or windows, wearable items, etc. and therefore expands the contribution of renewable technologies to the current worldwide increase in energy demand.
Nevertheless, OPVs still require improvements to become a viable technology, namely in what concerns efficiency levels, lifetimes, and toxicity issues, these last being mostly related to the specific solubility of the organic materials used in efficient devices. In particular, these require that highly toxic solvents, such as chlorinated aromatic solvents, are employed to process the organic layer.
The SUPRASOL project aims at preparing new organic semiconductors to perform as the photo-active layer in OPV devices with advantageous properties, namely high efficiency, morphologic stability, and solubility in aqueous or environmentally friendly solvents (e.g ethanol), this last allowing the fabrication of «green» devices. In addition, it proposes new materials containing molecular recognition motives, that promote the formation of morphologically stable supramolecular structures, whose characteristics promote maximum efficiency of the physical phenomena occurring in the organic layer of OPV devices.
The work plan goes from molecular design, through quantum mechanical theoretical methods, to preview the relevant optoelectronic properties of the materials to be prepared, their chemical synthesis, characterization, and application in laboratory prototypes of photovoltaic devices.
The work developed so far resulted in new compounds whose chemical structures allow for processing in low toxic solvents, such as ethanol and anisole (anisole is a solvent of low toxicity used in large-scale applications such as the production of perfumes). The integration of such materials in OPV devices was tested and the results showed that the devices' performance was not negatively affected, in fact, it was even superior when the solvent was changed from conventional (toxic) solvents to anisole or ethanol: anisole mixtures.
Another interesting result was the tuning of the absorption of some materials up to the Near-Infra-Red, which had been previously reviewed by the theory developed for the molecular structure of the materials. The project is still under course and, during the remaining period, the work will focus on improving the devices' lifetime through enhancing the morphological stability of the organic layer.
The SUPRASOL consortium brings together two complementary teams, one from IT (from the Organic Electronics group), which is in charge of the synthesis of the organic semiconductors and in the manufacture of photovoltaic devices, and a team from IST-ID, that conducts quantum chemical calculations and studies to assess the photophysics of the new materials.


SHARE:
By year
By Site
By Tag
© 2022, IT - Instituto de Telecomunicações | All Rights Reserved