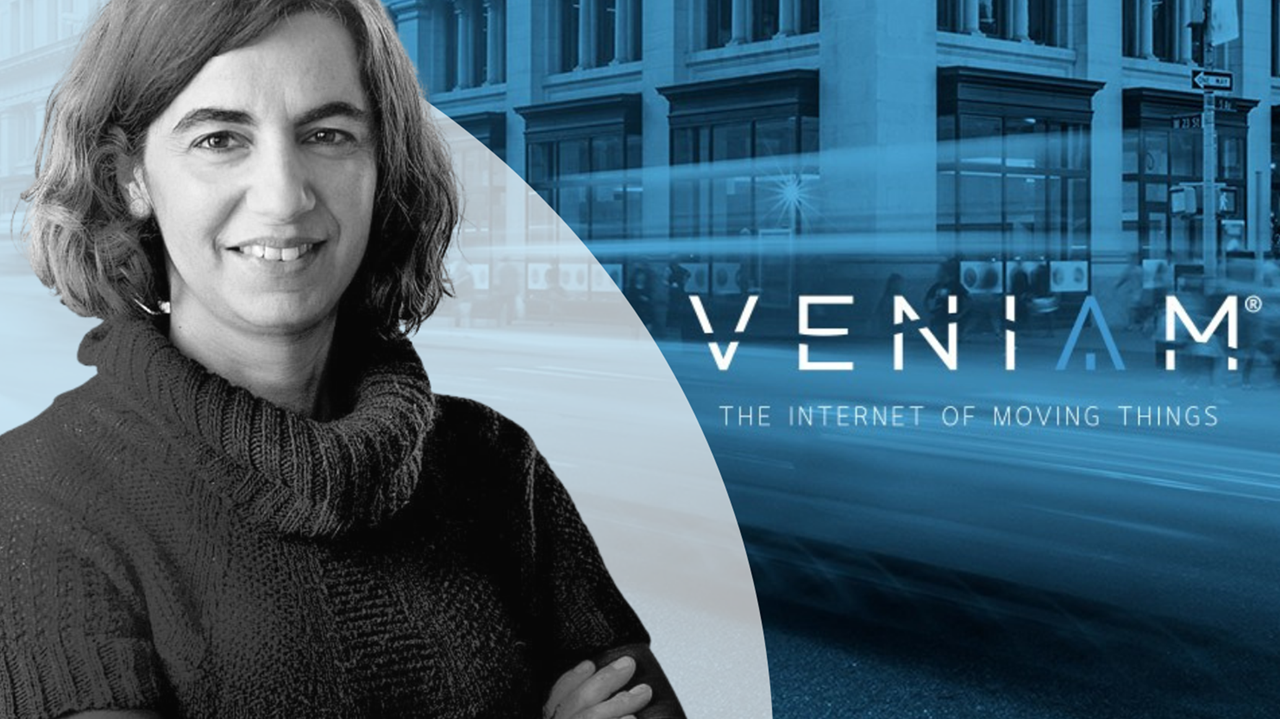 Veniam is a tech startup accelerating the future of mobility by delivering what they call “The Internet of Moving Things”. With an IP portfolio of 150+ patents, Veniam’s Intelligent Networking platform enables connected cars and autonomous vehicles to move massive amounts of data between vehicles and the cloud, at a fraction of the cost. Working with the world’s largest Auto OEMs and Tier 1 suppliers, Veniam aims to improve the lives of millions of people through a new mobility ecosystem — one where connected vehicles are more than machines that carry people and goods, where the utility of vehicles is maximized and places are ultimately more human.

The company was founded in March 2012 by pioneering technology researchers from IT, João Barros and Susana Sargento, and future mobility visionaries, Zipcar founder Robin Chase and CTO Roy Russell. Nowadays, it has its headquarters in Mountain View, California, Engineering Center in Porto, and sales offices in Detroit, Munich and Tokyo.

Veniam expects to have 200,000 vehicles connected with its technology in the coming 12 months, by which time it estimates the start of cars with its ‘software’ already included from the factory. Just as the IT spin-off turned nine years old this month, we caught up with Susana Sargento to find out more about its journey and evolution.

Going back to when Veniam was born…how did you and João Barros team up to start the company?

In 2008, we submitted a proposal for a project under the CMU Portugal Program - called Drive In - whose goal was to enable communication between vehicles, to create mechanisms for this type of communication. The project was later accepted, in 2009, and we got to work.

I have always enjoyed doing practical work, more hands-on, and João was more involved with routing and netcoding mechanisms, and we wanted to test all of it in a real environment. At the time, there was hardly any equipment available, so we bought some components that were said to be compatible with future vehicular communication standards, and started developing the necessary software. We took some cars to the road, began doing tests, and all of a sudden realized we were able to communicate between cars over long distances, roughly 700/800 meteres…and with video! Then and there we knew we had something that didn’t yet exist.

By this time it was late 2011, it’s important to mention we were all going through a rough time due to the crisis…and all the uncertainty forced me to focus on new ideas and set my eyes on the future. That’s when João sent me an email on a Sunday evening asking “What do you think about moving forward with this concept?”, and straight away I said “Sure, let’s talk!”.

And when did those conversations travel across the Atlantic, all the way to the US?

When we started talking about the possibility of setting up a company, João had to go on business trip to the US. He is by nature a very social person, very communicative, so he told several people about this idea and someone said to him “I know who would definitely jump on board”. That person was Robin Chase, founder and CEO of Zipcar, an American car-sharing startup that was eventually acquired by Avis.

They set up a meeting and Robin really liked the idea. She then brought along Roy Russell, Zipcar’s CTO, and volunteered right away to be Veniam’s CEO.

At the time, João and I embarked on the challenge as academics, with very little experience in commercializing products or transfering technology from lab to market, but our mindset always had to be “we have to be the best”. There could be no such thing as false modesty, we were trying to make cars communicate with each other and if an operator came in to do the same, they would manage to do within a very short time. So everyone told us at the time we had to get everything up and running quickly, and prove it could work on a large scale. We had to be first, but also the best.

Nowadays, Veniam’s vision seems to be more geared towards autonomous driving and the safety of future mobility systems, but it wasn’t always this way…

Not exactly. When we launched Veniam we didn’t necessarily think of it as a company focused on car safety, we essentially wanted to develop vehicle connectivity and turn cars into hotspots for Internet and services. But as things evolved and autonomous vehicles came on the scene, Veniam’s focus shifted from “infotainement” to this growing market demand. Only when autonomous driving started to become a reality did we see a surge in interest in our technology. It also explains why, at the time, operators didn’t really get ahead…they didn’t see it generating short-term profit.

So in a way, being able to foresee those market trends, and adapt the business plan accordingly, ended up giving Veniam its competitive advantage.

Definitely. We always tried to focus on the big picture…even as we developed our network, we always followed a technology-agnostic approach, because our goal wasn’t to create a new technology, we were using what was already available to build a vehicular network. Since these technologies are constantly evolving, we felt we couldn’t rely on just one. So we used DSRC [Dedicated Short-Range Communications] which was the vehicular technology, we used Wi-Fi, cellular and we also performed inter-technology handovers. Nowadays, we see 5G as yet another technology which obviously brings added benefits: greater bandwiths, extremely low latency for vehicle-based services…

And until now, what kind of partnerships has Veniam secured with the automotive industry?

I know the company is working very closely with a number of partners, but it’s interesting to see that the target has shifted slightly towards equipment manufacturers, more so than car companies. Which simply means we can reach bigger markets…by partnering with a car company we can work with that one brand, whereas partnering with an equipment manufacturer, let’s say Bosch, means we can suddenly work with dozens of brands.

How would you describe Veniam’s role in the transition towards sustainable mobility systems and in the fight against climate change?

It’s mainly about feeding into the Smart City ecosystem. By connecting vehicles to each other and to the internet, making them a part of the wireless infrastructure, it allows for intelligent traffic control and management in urban areas. Let’s imagine a road or area with heavy traffic flow at rush hour…if this forms a series of traffic jams and we can anticipate this happening, we are able to indicate the appropriate travel speed to oncoming cars so as to avoid frequent braking or stopping. That way, we can not only optimise the driving experience, but also improve road safety, fuel consumption, toxic gas emissions, which generally benefits the environment.

How do you see the evolution of smart cities in Portugal?

Things have evolved a little in reverse. People have been talking about Smart Cities for a long time,  but a decade ago there were very few interested cities. When we pioneered our mesh network of connected vehices in Porto, they were aware it would be interesting for the city, and because of Veniam we also felt we had to start testing it in a big city. But in recent years, we have come to realize that we can do a lot more if we start small. Implementing these networks on a large scale is really not easy, we literally turn cities into construction sites to make it happen. So it’s increasingly more accessible to start in a neighborhood, a small city, and progress from there. Nowadays they all want to be smart, each in their own way. Cities like Viseu, Famalicão, Braga, Matosinhos, Aveiro…are all great examples and are making huge progress in this area. They are taking services that are unique to their region and improving them with more intelligence, more data…ultimately making everything more connected.