It takes only a three-body system to break time symmetry 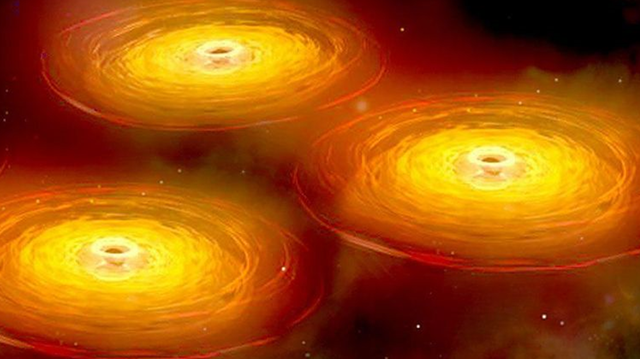 Most of the fundamental laws of physics have no problems with the direction in which they occur, they are symmetrical over time. For any one or two particles experiencing physical force or interaction, the laws of physics are valid both forwards and backward in time. It is as if time can be reversed - something called time symmetry.

However, the macroscopic world doesn't appear to be time-reversal invariant at all. When a glass falls and breaks it cannot be “unbroken” back in one piece. This type of irreversibility is well understood for large, many particle systems, and is an essential part of the sciences of thermodynamics and statistical mechanics. The interactions become so complex and occur between so many particles, the final state you wind up with is extraordinarily unlikely to ever return to the initial state, no matter how intricately you reverse the reaction. But, so far, scientists have only explained this break in symmetry over time in a statistical sense. Only in systems with large numbers of particles all interacting with one another does this type of chaos typically manifest, driving these dual phenomena of time irreversibility and entropy increases.

An international research team, led by Tjarda Boekholt (University of Coimbra/IT), have created simulations of three black holes interacting, having found that it is impossible to reverse their movement. The interacting black holes are so incredibly chaotic that a change of just the Planck Length - that’s the shortest distance possible - would cause such differences that would make it impossible to reverse the interaction. This is valid, not just for celestial bodies, but for any three particle system. These results show that it doesn´t take much to break time symmetry, with the smallest perturbation being able to add up incredibly quickly to change what we see in the world around us.

Entitled “Gargantuan chaotic gravitational three-body systems and their irreversibility to the Planck length”, this study contributes to a better “microscopic” understanding of the arrow of time, and will be published in the April edition of the Monthly Notices of the Royal Astronomical Society.