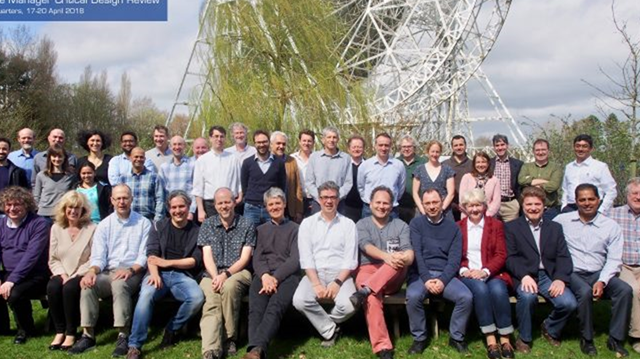 After four and a half years, the international Telescope Manager (TM) consortium has formally concluded its work on the architectural design of a fundamental part of the software for the Square Kilometre Array: the nervous system of the Observatory, which is called the Telescope Manager.
Formed in November 2013, the consortium was tasked with designing the crucial software that will control, monitor and operate the SKA telescopes. TM brought expertise in the field of Monitoring and Control for large-scale, complex systems and design of user interface experience.

Portugal’s ENGAGE SKA Consortium through IT and the Faculdade de Ciências of the University of Porto was one of the TM consortium members. Domingos Barbosa, João Paulo Barraca, Miguel Bergano and Dzianis Bartashevich formed the research team from IT. The national team has had a particularly important role, leading the design of the execution environment for the Telescope Manager. “We applied our expertise with distributed and scalable software architectures, typical of 5G telco environments, introducing concepts related to a Software Defined operation, services and product orientation, virtualization and quality monitoring, with impact to the entire telescope. We also impacted other areas such as reliability and security. Given the impact in such large collaboration context, I consider that it shows the quality of our engineers and companies”, said João Paulo Barraca.

The TM work was part of a global effort by 12 international engineering consortia representing 500 engineers and scientists in 20 countries. Nine of the consortia focus on a component of the telescope, each critical to the overall success of the project, while three others focus on developing advanced instrumentation for the telescope.

After four years of intense design work, the nine consortia are having their Critical Design Reviews or CDRs. In this final stage, the proposed design must meet the project’s tough engineering requirements to be approved, so that a construction proposal for the telescope can be developed.

The Square Kilometre Array (SKA) project is an international effort to build the world’s largest radio telescope. The SKA will conduct transformational science to improve our understanding of the Universe and the laws of fundamental physics, monitoring the sky in unprecedented detail and mapping it hundreds of times faster than any current facility


Photo: Members of the Telescope Manager consortium gathered at SKA Global Headquarters in the UK for the Critical Design Review in April. Credit: SKAO