1st Workshop from the CREaTION Project in Research Lines of Excellence

This is the first Workshop from CREaTION, an FCT project in research lines of excellence, a partnership between IT, IEETA (UA) and INESC-Porto. Innovative aspects from research on cognitive radio networks and demonstrate the experimental characterization of RF energy wearable harvesting devices applied to WBANs.

A five-stage Dickson voltage multiplier prototype with no match impedance has already been conceived and will be shown during the event, organized in the framework from Semana da Ciência e Tecnologia (Science and Technology Week) promoted by Ciência Viva. The innovative circuits for electromagnetic energy harvesting facilitate to achieve up to 4-5 Volts from the environment surrounding GSM 900/1800 MHz mobile phones.

Apart from one talk in the morning (in the Faculty of Engineering (Calçada Fonte do Lameiro, Covilhã), there will be five talks during the afternoon, in the Health Science Faculty from Universidade da Beira Interior, Av. Infante D. Henrique, Covilhã. More Information.. 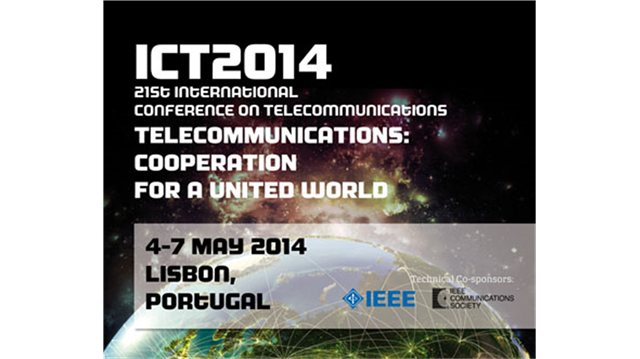 Call for Papers
ICT2014 - 5-7 May 2014, Lisbon, Portugal
TELECOMMUNICATIONS: COOPERATION FOR A UNITED WORLD

ICT 2014 will feature world-class plenary speakers, tutorials and technical sessions from academia, researching laboratories, government, industry(operators and suppliers) and security public services to discuss and exchange ideas in the fields of wireless and cable telecommunication networks, services and applications. The conference will also include an expo program and exhibition.